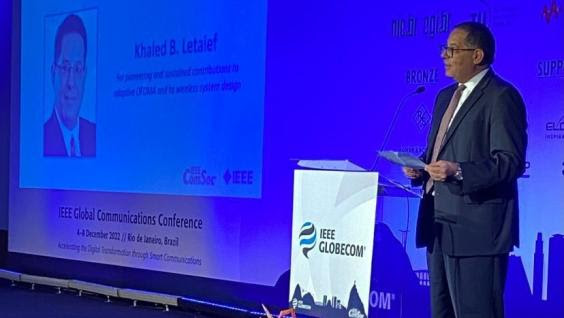 Prof. Khaled B. Letaief is the first in Hong Kong and the very few from Asia to receive the prestigious IEEE Communications Society Edwin Howard Armstrong Achievement Award since 1958.

Four distinguished scholars at the Hong Kong University of Science and Technology (HKUST) were honoured by the Institute of Electrical and Electronics Engineers (IEEE). On top of three newly-named IEEE Fellows, Prof. Khaled B. LETAIEF, New Bright Professor of Engineering and Chair Professor of Electronic and Computer Engineering became the first in Hong Kong and one of the first few in Asia to receive IEEE Communications Society (ComSoc) Edwin Howard Armstrong Achievement Award since the award was established in 1958.

Named in honour of Edwin H. Armstrong, inventor and father of the complete FM radio system, the award is a major career honour given annually to one individual who demonstrates persistent outstanding contributions in the field of communications and networking. Prof. Letaief was awarded for his pioneering and sustained contributions to adaptive OFDMA and wireless system design.

Prof. Khaled B. Letaief is an internationally recognized leader in wireless communications and networks with research interests in AI and machine learning, mobile cloud and edge computing, tactile internet, and 6G systems. He is a member of the US National Academy of Engineering as well as a Fellow of the Institute of Electrical and Electronics Engineers (IEEE), Hong Kong Institution of Engineers, and Hong Kong Academy of Engineering Sciences. He was recognized by Clarivate as a Highly Cited Researcher and listed among the 2020 top 30 of AI 2000 Most Influential Scholars in the Internet of Things.

Prof. Letaief received many distinguished awards and honours, including the most recent Honorary Doctorate in Engineering by the University of Johannesburg in 2022, the IEEE Technical Committee on Cognitive Networks Recognition Award 2021 and Tunisia’s national accolade for the Best Tunisian Researcher or Inventor Abroad in 2020. He is also dedicated to serving professional societies – in particular IEEE where he has held many leadership positions, notably IEEE ComSoc President (2018-2019) and founding editor-in-chief of the prestigious IEEE Transactions on Wireless Communications. He is currently serving as an elected member of the IEEE Board of Directors.

About The Hong Kong University of Science and Technology
The Hong Kong University of Science and Technology (HKUST) (https://hkust.edu.hk/) is a world-class research-intensive university that focuses on science, technology and business as well as humanities and social science. HKUST offers an international campus, and a holistic and interdisciplinary pedagogy to nurture well-rounded graduates with a global vision, a strong entrepreneurial spirit and innovative thinking. Over 80% of our research work was rated “Internationally excellent” or “world-leading” in the Research Assessment Exercise 2020 of Hong Kong’s University Grants Committee. We were ranked 3rd in Times Higher Education’s Young University Rankings 2022, and our graduates were ranked 30th worldwide and among the best universities from Asia in the Global Employability University Ranking and Survey 2022. As of 2022, HKUST members have founded 1,645 active start-ups, including 8 Unicorns and 7 IPO companies, generating economic impact worth over HK$ 400 billion. InvestHK cited QS World University Rankings by Subject 2021 to demonstrate the performance of five world’s top 100 local universities in several innovation-centric areas, among which HKUST ranked top in four engineering and materials science subjects.

Prof. Khaled B. Letaief is the first in Hong Kong and the very few from […]